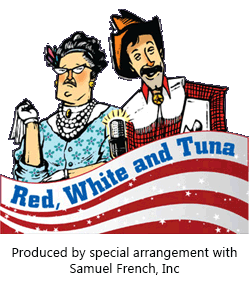 Hamilton County Theatre Guild announces the cast for "Red, White and Tuna," its final show of the 2018-19 regular season.

Noblesville’s Ron Richards is director of the comedy, which runs May 31-June 16 at The Belfry Theater in Noblesville.

The cast features three actors, who play multiple roles and both sexes in this comedy, a satirical ride into the hearts and minds of the polyester-clad citizens of Texas' third smallest town.

Here is the cast:

Along with Tuna's perennial favorite characters, some new Tuna denizens burst into the 4th of July Tuna High School Class Reunion. This sets the stage for a show full of fireworks and fun from the land where the Lion's Club is too liberal and Patsy Cline never dies in another side-splitting Tuna spoof of life in rural America.